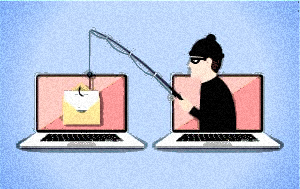 2. They create a false sense of urgency.

3. They ask for gift cards.

Let’s be real: No one actually ever urgently needs gift cards. Scammers ask for this type of “payment” because there aren’t a lot of protections for consumers when it comes to gift cards. They basically act like cash once the scammer has the information needed to use them.

4. They re-emphasize the urgency.

This is where Cris starts to have a little bit of fun. She asks if the cards are for the Lion Sanctuary or the Haunted House and the scammer responds in full seriousness, “The lion.” The scammer then re-emphasizes the urgency of the situation and Cris, like the good employee she is, tells him she can get to it ASAP. Because, you know, she knows how important the Lions are.

The scammer then checks in after a few minutes to see how things are going — and to really underscore the urgency. This makes it less likely that Cris is going to check on the situation or maybe start thinking, “Hmm… Why does Josh need gift cards all of a sudden?” You can also see her messing with him again here, when she talks about how dangerous “Dave the hotel manager” is.

5. They ask for a picture of the gift cards.

After a couple more exchanges messing with “Josh” and saying she’s at the store, he asks Cris to take a photo of the gift card rack. This is to ensure that the person is actually at the store, as well as to choose which cards the scammer wants. But, because this is a “scam the scammers” story, Cris just sent him a photo of a gift card rack that she found on Google. And then she makes things even weirder.

6. They ask for the card numbers.

Cris offers to mail the cards to “Josh,” but he insists that she instead scratch off the silver part and send the numbers to him. Remember: Once those numbers are in the scammer’s hands, there’s pretty much nothing the person being scammed can do. Cris decides to up the weirdness factor even more.

If you’re messing with a scammer, eventually they’ll catch on and give up. That’s what finally happens when Cris threatens to call Josh’s wife. Done with these shenanigans, Josh gives up the game in an explosion of profanity.

While we don’t recommend doing what Cris did and trying to scam the scammer yourself, this situation very clearly illustrates the anatomy of this type of phishing scam. Remember: Your boss will likely never need gift cards. And if your gut is saying something is fishy? It probably is.