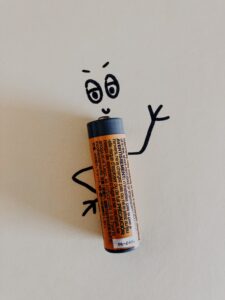 A water-activated biodegradable battery made of paper and powered by salt and inks features among the 200 best inventions of the year in TIME Magazine. It was created by researchers at the Swiss Federal Laboratory for Materials Testing and Research (EMPA),

“It sounds impossible: Just add water to a piece of paper and get energy,” saidExternal link TIME Magazine, who chose the Swiss-made battery as one the winners in this year’s “Experimental” invention category.

The battery is poweredExternal link by salt (dispersed in the paper) and inks containing graphite, zinc, and carbon.

AnalysisExternal link of the performance of a one-cell paper battery revealed that after two drops of water were added, the battery activated within 20 seconds and, when not connected to an energy-consuming device, reached a stable voltage of 1.2 volts. The voltage of a standard AA alkaline battery is 1.5 volts.

After one hour, the one-cell battery’s performance dropped significantly as the paper dried out. But after the researchers added two extra drops of water, the battery maintained a stable operating voltage of 0.5 volts for another hour.

Within two to five years, the technology could be used in low-power single-use electronics such as medical diagnostic devices and smart packaging, EMPA’s Gustav Nyström, the inventor, told TIME magazine. “I see a new role for paper… that could also be an answer to the growing environmental concern over electronic waste,” he said.

Each year TIME Magazine lists a selection of best inventions that “change how we live”, based on their originality, creativity, efficiency, impact and other criteria.