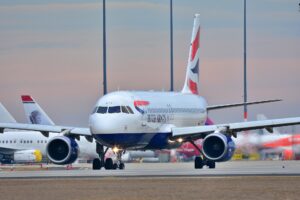 For those of you who haven’t traveled lately, things have changed over the last couple of years. For example, most airlines don’t take cash anymore, and an increasing number don’t accept credit cards.

Airlines are almost all short-staffed, and at this time of year, there are a lot of mechanical delays and weather events. Depending on the airport, the ability to rebook a flight at the gate may no longer exist. Spending the night in an airport is no fun, and neither is missing a flight because you didn’t make it through security in time.

This week, I’ll share some tips on how to survive traveling over the holidays. We’ll close with my product of the week: my favorite suitcase, which is like a rolling dresser.

Over the past two months, most of the flights I’ve been on have had a mechanical or airline delay. Generally, the delays have been just short of an hour, suggesting you want at least one hour between connecting flights if you don’t want to be stranded.

If you are taking a cruise and you have to fly to the port of departure, you might want to fly the day before so that any delay doesn’t keep you from meeting the boat. We had first-class tickets on our last flight on United to meet up for a cruise. Still, we were delayed at the departing airport for 30 minutes, then again at the arrival airport (San Francisco) for 30 minutes, which had us arriving at the gate three minutes after they closed it. They wouldn’t let us on the plane, arguing that we should have run faster.

As a result, we lost our direct flight to Florida, lost our first-class seats, and had to route through Chicago, which got us there late at night rather than mid-day. Fortunately, our cruise was the next day, or we’d have missed our departure and had to try to catch the ship at the next port, a very expensive workaround.

The more critical it is that you get to your destination on time, the more extra time you should schedule for transport. You should plan to arrive the day before for a wedding, funeral, family event, business meeting, or tour with a firm start time instead of cutting it close. Otherwise, there’s a good chance you’ll miss that critical event.

Download the airline app before you leave, and if it has the option to pre-load a credit card, do it. On my last trip, a couple from Australia in front of me couldn’t buy drinks or food because United no longer takes cash or credit cards on the plane. Instead, they pull the card data from the app.

These apps are also increasingly how you get in-flight content (movies, TV, music, etc.), and you generally can’t install the app after you take off. Finally, if you’re having connection issues, the app can help you work through them. Gate changes and delayed or canceled flights tend to show up in the app, allowing you to work through them without standing in the long line at the customer help desk.

On my last trip, my final leg was canceled due to a mechanical problem which means I should have, and did, get vouchers for meals and a hotel stay. But they didn’t come when I rebooked the flight at the kiosk. Instead, they showed up in the app at some point while I was walking to the hotel, and I didn’t see them until the next day. That cost me about $500 of avoidable expenses.

Load and become familiar with the airline app features before you depart. That app can save your butt, but only if you have it and know how to use it.

As I did last week, you’ll find that when a flight is canceled, you can no longer rebook at the gate. Instead, you must go to a customer help desk. The airline sent me to one in Colorado with a line around a quarter mile long. I couldn’t even see the tail end.

If there is a problem, the help desk isn’t so helpful in many cases. However, the airline clubs will rebook you, and the lines may only be a few people long. Some credit cards come with limited club access, but often that is revoked during the holidays due to overcapacity.

Still, if you get stuck in an airport for many hours, the club experience can make it far more tolerable. The better clubs have free buffets, drinks, and far more relaxing places to sit than in the airport proper, as well as having dedicated Wi-Fi setups. Currently, because I mostly fly Alaska Air, I belong to the Alaska Lounge, which has share relationships with some other airlines like American Airlines.

If you are on a long, expensive trip, an airline club could make the difference between whether you are comfortable between flights and can rebook quickly if you miss a flight or have a connection canceled.

Consider a Tablet Instead of a Laptop

When you are truly on vacation, you likely don’t need a laptop on the trip for media, but a smartphone just doesn’t have a large enough screen for consuming movies and TV shows.

Many airlines have a back-of-seat mount for a small tablet (around 10 inches) that will place it at eye level, allow you to consume your content comfortably, and let you use the seat tray for food or other things, regardless of the class in which you’re seated.

In business or first class, you have plenty of room for a laptop, and you’ll enjoy the even larger screen. But in coach, where space is tight, the setup favors a 10-inch tablet over a laptop. A tablet is best because it has long battery life, can use a common USB charging slot on most planes, and it’s lighter than a laptop.

Be aware that not all airlines have USB sockets, so bring your charger to help ensure your tablet lasts through a long trip.

By this, I mean alcohol. In a plane, the air is thinner, making alcohol consumption very dangerous because you’re more likely to become badly intoxicated. Not only does this increase the possibility of accidents, but it can also cause people to behave in ways that would require the crew to land the plane.

If that happens, you’ll likely be banned from the airline altogether mid-trip. If an issue arises, the more self-control you have, the better you can deal with the problem.

Remember to drink enough water to avoid dehydration, which can lead to nausea, headaches, and other unpleasant outcomes.

Onboard Wi-Fi and Moving Fast

Wi-Fi has improved substantially on newer planes, to the point where I’ve been able to stream Netflix and Amazon Prime on some.

If a problem arises with your itinerary, the faster you can move to rebook, the less likely you’ll get stuck with all of the connecting flights sold out.

Wi-Fi can give you more timely information on your connections, allow you to rebook a canceled flight while you are still in the air, and alert you to gate changes or delays before you have a heart attack running to a gate at the other end of the airport — only to find that they moved the departure gate back to where you initially got off the plane (this actually happened to me once).

You need to move fast because if a flight is canceled, every one of the hundreds of other passengers is also trying to rebook. If they get the new seats before you, you’ll also miss the next fight, and your family won’t be amused. Same with an emergency hotel. You need to hustle before the rooms sell out, so you don’t have to drive farther for a room or spend the night in the airport — which is no fun.

You want an airline that is not in financial distress, does not have labor difficulties or is laying off employees needed to operate or repair its aircraft, and has decent traffic through your connecting airports.

We used one airline that flew direct to Las Vegas but only two days a week. If they have a mechanical problem, you either have to buy a far more expensive ticket on another carrier to get to your hotel in time or cancel the trip, neither of which is a great choice.

For the airline to put you on another plane in a timely fashion, it needs other available aircraft at the airport. But remember: at this time of year, flights tend to be overbooked, so you may still be one of those pissed-off people stuck at the airport that TV reporters want to talk to so they can share your misery with the world. Personally, I’d like to avoid that misery in the first place.

Those of us who travel regularly all have stories of luggage that didn’t make it. I’ve also watched people pack like they are going away for 12 months, not seven days. Having to deal with massive amounts of luggage can ruin a trip even if it doesn’t get lost.

Learn to pack light and carry your luggage on the plane. If you end up on a small plane, you may have to gate-check the bags and wait for them when the plane lands, which can tighten connections (see above on connection times). But aside from that, you’ll always have your bag with you, and a decent roller can also provide a place to sit if you find yourself waiting in a long line.

Backpacks are an alternative, but as you get older, your ability to lug a lot of weight on your back decreases, so walk around with the loaded backpack a bit and see if you can safely carry it for a mile. If you can’t, use a roller.

You might also consider a service like ShipGo, which allows you to ship your luggage to your destination. It isn’t cheap, but it can give you peace of mind knowing you don’t need to worry about your baggage in transit.

Wrapping Up: Manage Your Temper

Travel this time of year can be a nightmare, but if you manage your luggage, load and learn how to use the airline apps, consider an airline club, and choose your carrier based on their capabilities and customer treatment rather than just price, you’ll minimize your aggravation.

Nevertheless, one thing you do need to get a handle on immediately is your temper. The nicer you are to airline staff, the more willing they will be to help you. If you threaten, curse, or otherwise act out, you not only can get kicked off a flight, but you might also be banned by the airline outright.

Realize that, in most cases, the problems that are upsetting you weren’t caused by the people you are, or feel like, yelling at. Dressing down someone you are asking for help rarely results in an outcome you’ll like. So be nice and empathize with the poor person who is likely getting a lot of undeserved grief.

Instead, thank them if they help you in any way. You might be surprised that sometimes, someone you treat nicely will go out of their way to take care of you, and that alone is reason enough to be nice.

There will be a lot of people stranded over the next several weeks. If you plan correctly, you’re less likely to be one of them. But if you are, good planning can help make it more of an interesting adventure than an unmitigated disaster. Particularly when I’m on vacation, I want more of the former and none of the latter.