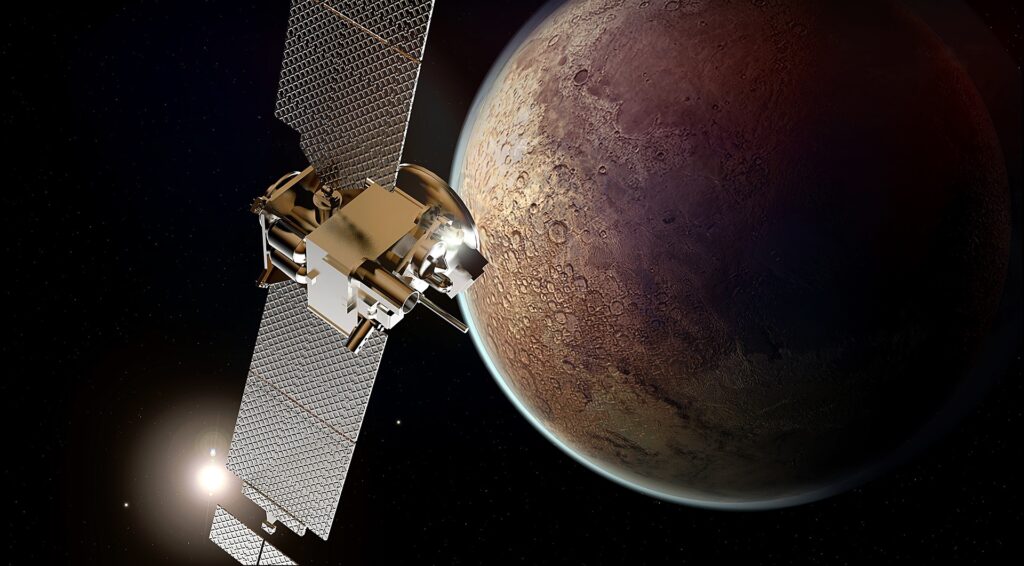 Another space internet provider is going to defile our skies with a satellite that looks to be brighter than everything but the moon.

We are about to get a new star, one that could outshine every other object in the night sky except the moon: a giant internet satellite the size of a typical New York studio apartment so that regular cellphones can access the internet from space.

Just a few years ago, something so bright would have meant something very different. A distant supernova, perhaps, that would have made us look up to reflect on our very existence and our place in the eternal cosmos. Or maybe a comet, the harbingers of terrible or great news that humans whisper about as they have done for millennia.

It could even have been a breathtaking new giant space station, a Space Odyssey structure to usher in a new era of exploration and excitement on our way to Mars and the Jovian moons.

But today, a new blinding point of light on the celestial sphere has nothing to do with the infinite star field that has captured our collective imagination since the dawn of consciousness—the giant nuclear forges that exploded eons ago, millions of light years away.

Stars created the very matter that makes all of us and everything that surrounds us. They are also an intrinsic part of our culture, our personal and collective psyche and mythos. Stars are everywhere and we are all “star stuff.”

There’s none of that celestial wonder in this new thingamajig. Its giant antenna and solar panels will reflect the sunlight back at us in the middle of the night, adding some gross artificial noise to our favorite eternal landscape and ruining the view of terrestrial telescopes worldwide.

Its name is BlueWalker 3, and it’s made of glass and metal alloys by a startup communications company called AST SpaceMobile, which hails from the Great State of Texas, the dry version of Florida where everything is huge, as AST’s CEO flaunts on Twitter.

BlueWalker 3 will launch today folded atop a SpaceX Falcon 9 reusable rocket from a launch pad at NASA’s Kennedy Space Center. When unfolded in orbit, it will become a flat, 693-square-foot machine, a giant phased array antenna designed to provide broadband internet access to people on the ground.

In terms of UX alone, the project is impressive. Unlike SpaceX’s own Starlink internet satellites, BlueWalker 3 will not require users to install a dish and a space router on the ground in order to access the web. AST claims that this will be the “first and only global cellular broadband network in space to operate directly with standard, unmodified mobile devices” based on its “extensive IP and patent portfolio.”

You will only have to sign up for the service and you will have access to TikTok anywhere there’s coverage using any 4G or 5G phone. Which sounds great if you don’t consider the consequences.

Astronomers at the Vera C. Rubin Observatory and the International Astronomical Union’s Center for the Protection of Dark and Quiet Sky From Satellite Constellation Interference believe that this new giant communications satellite will ruin our skies and interfere with celestial observations, just like Starlink is doing.

They are right. Of course, Elon Musk dismissed them at the time, but the effect of these constellations has been widely documented.
This trend will only get worse. AST plans to put many of these satellites in low earth orbit:

more than 100 spacecraft by the end of 2024. Many of those will be even bigger, reflecting even more sunlight back at Earth. That’s on top of Starlink’s current constellation, which already includes 3,000 satellites, a number that will grow beyond 30,000.

THE SKY BELONGS TO ALL OF US

These satellites are an appropriation of a public good. Space doesn’t belong to anyone; it belongs to everyone. And it has been that way as long as we’ve existed.

Allowing Musk, Bezos, AST, and the rest of these companies to literally invade our only window to the universe with tens of thousands of satellites and giant antennas ignores a source of pollution that blinds our view of the cosmos.

Here’s how European Space Agency CEO Josef Aschbacher described the existence of Musk’s satellites to the Financial Times: “You have one person owning half of the active satellites in the world. That’s quite amazing. De facto, he is making the rules. The rest of the world including Europe . . . is just not responding quick enough.”

AST, Starlink, and Amazon’s Project Kuiper justify their actions with exactly the same claim as their raison d’être: They are on a mission to “eliminate the connectivity gaps faced by today’s five billion mobile subscribers and finally bring broadband to the billions who remain unconnected.”

And yes, having internet access everywhere is great. It’s a powerful educational and commercial tool that can benefit many in remote and poor areas. It can even help a country stop the unlawful invasion of another country.

All of the above is true, but these points are part of a fallacious argument. The fact is that we can also spend the money to build the ground infrastructure of antennas to provide these same services, which can also be more resilient than satellites. It just requires a bigger investment and the profits are not as scalable as private companies want.

But we can do it without destroying something that has been with us for tens of thousands of years.

These companies are stealing what has been ours since the dawn of time without asking anybody first, just so they can sell convenience. From microwave dinners to recipes in a box to food and grocery delivery apps, like 2-year-olds we just want to have everything immediately, and that means being able to TikTok from the middle of your desert trek to show off your cool new jacket and pants. Right now. Not when you are back home. It has to be now. Even if that means that you will be ruining the very same dark skies you traveled for miles to see.

It seems to me that all of us should have a say on this. That this giant satellite that could shine brighter than any star is a call to action. That perhaps it is time to say enough, to stop it, to make a stand and say, “Nope, you guys have already screwed up the surface of the planet in the name of profit. Let’s not touch our stars too.”