War in Ukraine Brings Out Scammers Trying to Exploit Donations 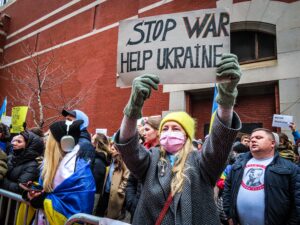 The world has responded to Russia’s invasion of Ukraine with an outpouring of support for the Ukrainian people. That hasn’t escaped the notice of scammers, who are all too willing to take advantage of people’s desire to help.

One scam email sports a logo in the blue and yellow colors of the Ukrainian flag. It asks for donations to a humanitarian organization in the form of US dollars and a handful of cryptocurrencies. Other bogus emails ask recipients to send money to help children or to buy weapons for the Ukrainian military.

Fake charity websites are popping up, too. Researchers at ESET, a Slovakia-based antivirus company, said they’d discovered a handful of sites using the colors of Ukraine’s flag and dramatic images of soldiers and explosions. The websites solicit “aid,” ESET said, but they don’t provide specifics as to how the money will be used.

In a sad commentary on humanity, the Ukraine-themed phishing emails and websites started showing up shortly after the Feb. 24 invasion that triggered one of Europe’s biggest humanitarian crises in years. In addition to the pleas for help, scammers also pretended to be rich Ukrainian businessmen looking to move money out of the country, a twist on the infamous Nigerian prince scam.

Security researchers say the scam activity is to be expected. Wars create all the emotional triggers, such as a sense of urgency, that scammers exploit as they try to separate people from their money.

“Wherever there is war,” said Bogdan Botezatu, who runs threat research at Bitdefender, “there will be jackals trying to piggyback on people’s pain.”

Bitdefender, a Romania-based cybersecurity company, began spotting phishing campaigns a day after the invasion started, Botezatu said. The plight of Ukrainian refugees has become very real to him because refugees from the country have already arrived in Romania’s capital, Bucharest, which sits about 300 miles from the border with Ukraine.

There’s no shortage of legitimate charities raising money online to help refugees. The best way to reach them is to type their URL directly into your browser or get a link from a trusted source. CNET maintains a list of credible charities helping Ukrainians.

It’s worth noting that some real charities accept donations in the form of cryptocurrency. But consumers should be especially careful when their crypto is involved, said Tony Anscombe, chief security evangelist at ESET.

“Unless it’s a valid crypto wallet from a very official organization, I would avoid it,” Anscombe said. “There’s no way of knowing who’s really behind a crypto wallet.”

While the flood of scams can make it tough for well-meaning people, researchers urge the charitably minded to take the same precautions they’d take before contributing to any organization.

Vet any group before you make a contribution, to ensure that it’s reputable. A quick Google search as well as looking up the name in GuideStar or Charity Navigator are good places to start.

Ignore a plea for money if it comes from a stranger. Researchers expect an uptick in romance-themed scams, with scammers pretending to be Ukrainian women who are refugees or seeking help in leaving the country.

Consumers should also delete unsolicited requests for money and steer clear of solicitations that pop up on social media, a popular platform for scammers to exploit.

Most importantly: Resist appeals that play on urgency. Be wary of any charity that says it needs to send money right away.

“The need isn’t going away anytime soon,” Anscombe said. “While there is a time sensitivity, a real charity will take your money whether you donate today or tomorrow.”