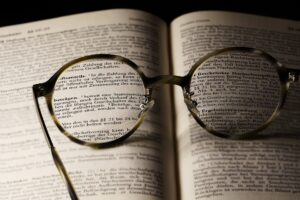 The debut project from Brooklyn-based Betterlab takes aim at a condition that affects a third of people worldwide.

earsightedness doesn’t sound that scary, but more and more people around the world are suffering from its clinical name: myopia. Because of myopia, China can’t find enough pilots, while the world is losing $244 billion in productivity a year, and that’s just the beginning: By 2050, more than half the world’s population is projected to have myopia—and as many as 10% of that group will go blind from the condition.

The problem was once primarily genetic, but new cases are increasingly attributed to kids getting too much screen time and too little sunlight for the eyes to develop properly. And while research has found that preventing myopia isn’t much more complicated than spending enough time outside, a new pair of glasses developed by designer Todd Bracher and a former NASA scientist aims to fix myopia without forcing anyone to change their behavior, take drugs, or wear special prismatic lenses. They were a finalist in our recent World Changing Ideas awards.

The glasses are actually nothing more than a frame. Instead of lenses, they simply feature open air. But when they soak up just a minute of sunlight or strong lamp light, they glow for a full 25 minutes with the exact wavelength of sunlight that helps eyes develop. Creators of the glasses believe that experiencing that wavelength twice a day is enough to counteract the onset of myopia.

“Our technology is purely passive. You don’t have to charge the thing,” Bracher says. “It’s basically glow-in-the-dark.”

The glasses were developed by Bracher’s Betterlab. For his day job, Bracher runs a 14-person design studio. He’s done a lot of typical design contractor work for companies like Humanscale, where he developed one of the most environmentally friendly task chairs ever. Yet over the past several years, he also soft-launched Betterlab as a venture projects arm to push into more experimental, high-impact products that were closer to research than market.

“In the design industry in general, there’s a lot of celebration around coffee tables and sofas,” Bracher says. “There’s a place for it obviously. But that for me is limiting in terms of what our contributions are.”

The myopia glasses are the first public project from Betterlab. They feature a modernist, rounded design. Their secret sauce is entirely in their ability to glow at just the right wavelength to activate retinal dopamine, a key neurotransmitter affecting the development of your eyes: 480 nm, or nanometers. Bracher was able to source that photoluminescent pigment from a single supplier, which is mixed into the resin of the glasses so it doesn’t scratch away like a simple coat of paint.

“If you’re in a dark room, you’ll see a glowing effect that’s really cool,” Bracher says. “We wanted to destigmatize [myopia treatment], where there are a lot of Coke bottle glasses. We thought these would be more fun.”

Bracher’s design is patent pending, and has yet to be validated by third-party research. But the logic is sound: Rather than building and installing lighting to emit 480 nm inside schools and offices around the world, he believes it’s simpler and more cost efficient to simply produce glowing glasses.

As such, he hasn’t decided if he’ll actually bring the glasses to market, or license the technology for others to use. That depends a lot on the exact nature of this project’s funding, which is still undetermined. And that lack of determination is par for the course at Betterlab.

In short, Betterlab is where Bracher wants to develop solutions for some of the world’s biggest problems. Rather than operating as a more typical design consultancy, Betterlab partners with scientists and researchers—people who often have piles of patents but no product expertise—to turn intellectual property into high-impact products.

“Researchers write patents for solutions that may arrive 10 years from now. They’re predicting the future,” Bracher says. “One gentleman I work with has over 400 patents, half of which the technology has not arrived yet.”

Bracher said he was first inspired to launch Betterlab after consulting for 3M, where he came across the company’s sizable patent portfolio that, for all intents and purposes, was just sitting there. Companies park patents away into filing cabinets and leave it to lawyers to litigate other companies for licensing fees. After 20 years of building products, Bracher sees his role, as a scientifically minded designer, to translate some of the innovation lurking in research into shippable products.

Aside from the myopia glasses, Bracher has developed two other products under the Betterlab umbrella. The first is a project he’s coordinating with a major sunglasses manufacturer, which leverages NASA research on circadian rhythm to help athletes, or anyone who’s traveling, defeat jet lag. The solution is in two parts. The first is an algorithm (in an app), developed in the 1980s for the International Space Station, that plans when you can see the light of certain wavelengths to promote new sleep schedules. To accompany the algorithm, Bracher is building more glasses to filter out the right wavelengths of light, at the right time, to promote better sleep.

The second project is based on UVC light. In January 2020, Bracher began collaborating with another scientist on using this light to kill germs without damaging your skin, building light fixtures that could be installed in buildings to purify surfaces. (This UVC approach was quite popular across the industry and led to lots of debate). After meeting with a major bank chain, and hearing the particulars of the company’s Purel budget during COVID-19, he thought of another articulation of UVC technology: He’s developed a handheld device that can be used instead of Purel to sanitize your hands, without all the extra waste and skin inflammation that can come from hand sanitizer.

The challenges ahead for Bracher and Betterlab sound like the same challenges innovators face all the time: finding the right sources of funding to push the most impactful ideas to market to transform good science into tangible products.

“We’re here to let them [as scientists] do their life’s work addressing global concerns,” Bracher says. “And [ours as designers] is to do our jobs, which is to fix the adoption gap.”