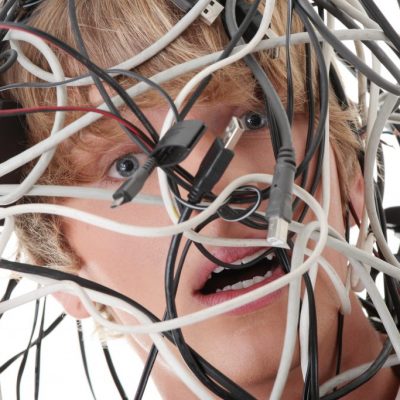 ‘I’m Not Sure We’ll Survive It’:  How Constant Tech Is Breaking Our Brains

If you’re worried that our brains are being permanently and irrevocably altered by the constant use of technology during the coronavirus pandemic, Jaron Lanier has bad news and worse news.

“I’m not sure we’ll survive it,” the VR pioneer and noted technology skeptic said this week during a virtual panel discussion at the 2020 Fast Company Innovation Festival.

Granted, he followed that up with a more optimistic afterthought: “I do think the capacity of people to become more self-directed [with their use of technology] during the pandemic is actually a good sign—and it gives me some hope,” he added.

Along with Microsoft CVP Emma Williams and Stanford professor Jeremy Bailenson, Lanier spoke with Harry McCracken, Fast Company‘s senior tech editor, about our new pandemic world of 9-to-5 Zoom meetings and 24/7 doomscrolling, and the implications it has for society and culture over the long term. Lanier says he worries that the algorithms that curate our social feeds and decide what content to deliver hold even more sway over us than they did before—and that’s a dangerous prospect at a time when we’re more vulnerable to the effects of isolation and polarization.

“All of us are having our innate capacities for paranoia, irritability, xenophobia, anger, and fear being stoked a little bit more than in other periods,” Lanier said. “Even though the technology of the algorithms is kind of crude, it’s so pervasive and so persistent that it keeps raising the temperature of the most unfortunate side of human nature and human society.”

But Lanier, who currently works with Microsoft Research, also said there is reason to be optimistic that the pandemic will prompt us to be more intentional about our time spent with screens, particularly for younger people.

“Kids, like everybody else, have shifted their psychology about the internet a little bit to be a bit more intentional and self-driven instead of being passive recipients of algorithmically calculated feeds,” he said. “So you see kids saying, ‘Me and my friends will get together at approximately this time on video.’ And that’s a very different mentality than sitting there watching the feed from some social media algorithm. So I think that’s positive.”

HOW WE LIVE NOW

As the COVID-19 pandemic stretches on and on with no end in sight, the mental well-being of users has become a primary concern for tech companies such as Microsoft. Tasked with building digital tools for personal and workplace communications, such companies now find themselves overseeing platforms where we spend the vast majority of our waking hours—from the time we sign on to a workplace communications service in the morning until our last video call with a loved one before we go to sleep.

Emma Williams, Microsoft’s corporate VP of modern workplace transformation—who also took part in the panel discussion—cited some rather alarming statistics around how people have been using Microsoft Teams since the pandemic supercharged working from home. She said the company has seen a stunning 200% increase in Teams users sending chat messages on weekends and a 69% increase in sending them between 5:00 p.m. and midnight.

What’s the antidote to the harms of constant connectivity? There’s no magic bullet yet, but Jeremy Bailenson, founding director of Stanford University’s Virtual Human Interaction Lab, said it starts with figuring out how to design communications products that better mimic how we interact with each other in real face-to-face interactions. Consider your typical Zoom meeting—with its Brady Bunch-style grid layout where every participant faces a camera. That’s not how eye contact in a real-life meeting actually works, Bailenson points out.

“In a Zoom call, because of a design decision, every single person stares at you the entire duration of the conversation, regardless of who’s speaking,” he said. “We’ve done research in my lab that shows that when you put a large face close up to you virtually—even if it’s not a physical person, but a virtual image—it causes this fight-or-flight response.”

To help combat videoconferencing fatigue, Microsoft Teams over the summer introduced Together Mode, a product Lanier helped develop, a feature that presents the appearance that people taking part in the chat are all in the same physical space. It’s meant to more closely mirror real-world togetherness.

In the physical world, eye contact is an important social cue, Bailenson notes, and human brains are hardwired to respond to even the subtlest forms of it. But like anything else in life, too much of a good thing is bad.

“What we’ve done inadvertently is design every default on every videoconference system to increase the amount of direct eye contact you get from very large faces constantly,” he says. “If you think about your real life, when somebody is very close to you and looking you in the eye, one of two things are going to happen. You’re going to get in a fight—or maybe you’re going to have a meeting experience.”