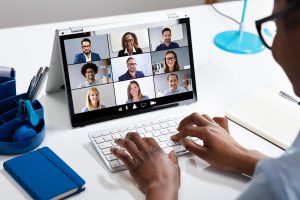 The crypto agency has a list of questions for federal employees and contractors to ask as they choose a collaboration tool.

Video conferencing platforms Zoom and Microsoft Teams are both FedRamp approved, but while Zoom offers end-to-end encryption, Microsoft Teams does not, according to the National Security Agency.

These are just two of nine factors the NSA cites in creating a guide to help federal workers choose commercial telework tools for “safely using collaboration services,” as necessitated by the coronavirus pandemic.

The guide, which NSA released Friday, applies only to commercial applications, and one strong recommendation from the agency is that, when possible, workers use U.S. government services such as Defense Collaboration Services, Intelink Services and others, which were designed specifically for secure government communications. But government workers still need to interact with external entities which might be sending them invitations via commercial applications, and the NSA has detailed a number of factors for them to weigh in deciding which ones to facilitate:

The NSA guidance includes a disclaimer noting it is not in any way an endorsement of any specific company’s service and stressed workers should make their decisions based on further consultation with information technology support or chief information officer guidance from their own agencies or departments.

Related: The Pentagon Is Using Zoom. Is it Safe?

Analysis by a cybersecurity expert for Project Spectrum—an initiative supported by the Defense Department’s Office of Small Business Programs—advises entities within the defense industrial base to avoid using Zoom. Among other things, the researcher cites the company’s connections to China.

The Project Spectrum paper notes servers running Zoom software are located in China, along with 28% of the company’s workforce.

One domestic alternative Project Spectrum recommends is Microsoft Teams. But while the NSA guide touts the benefits of open source applications, it notes that the code for Microsoft Teams is not shared.

“Open source development can provide accountability that code is written to secure programming best practices and isn’t likely to introduce vulnerabilities or weaknesses that could put users and data at risk,” reads the NSA guide.

Without mentioning China specifically, the NSA also included ‘country of origin’ as a factor for assessing the safety of telework services. It did not classify the 13 providers according to this criteria, as it did with the other eight factors.

“Since it is well documented that some countries require that communications be provided to law enforcement and intelligence services, it may not be wise for certain USG missions to be performed on services hosted or developed under certain foreign legal jurisdictions,” NSA says. “Users should be aware that the country of origin where products were developed is not always public knowledge.”

A joint statement from the General Services Administration and the Department of Homeland Security reportedly advised federal employees to use “Zoom for Government” and not the commercial version of the company’s popular video conferencing platform. A NSA footnote on Zoom’s commercial services states its end-to-end encryption is “configurable” and “partial” but the agency did not respond to questions about what partial end-to-end encryption means.

The NSA also did not respond by deadline to a request for comment on whether Zoom for Government sufficiently addresses the concerns the Project Spectrum white paper raised.

Editor’s Note: The story has been updated to clarify that NSA’s conclusion about Zoom’s commercial services has a footnote.