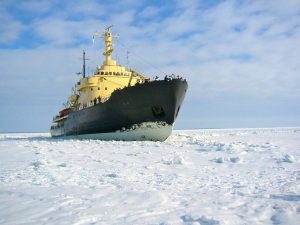 A recent White House memo directs the Pentagon and other executive departments to provide a roadmap by early August for creating a security fleet of icebreaker ships. The Washington Free Beacon reports. Continue reading original article

11 Aug. 2020 — The move to acquire icebreaker ships signals Washington’s recognition of the Arctic and Antarctic regions’ increasing geopolitical significance, as well as a willingness to stand up to China and Russia.

The memo comes at a time when the U.S. has minimal strategic capabilities in the polar regions; there is not a single U.S. port in the Arctic capable of housing icebreaking ships. This shortcoming is addressed by the memo, which orders a search for at least two “optimal” U.S.-based port locations and two international port locations.

Military authorities say the need to bolster U.S. operations in the polar regions is immediate. The gap between America and its competitors in Arctic operations and power projection is substantial. Russia has a fleet of six heavy-class icebreakers and pledges to double that number in the next decade. Meanwhile, Beijing announced plans to build its own icebreaker ship late last year. The two nations increasingly have cooperated in the region as well.

Related: Arctic surveillance is the result of East-West political tensions in the polar regions