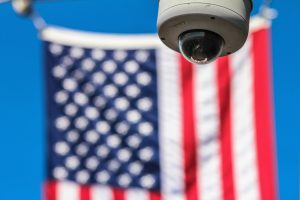 An increasing number of remote video surveillance towers using AI and radar are being deployed to help counter illegal activity on the US-Canada border, as Ron Alalouff reports.

There’s been a great deal of publicity and controversy around the United States’ southern border with Mexico over the past few years – wall or no wall – but far less attention has been paid to its northern border with Canada. Yet an increase in illegal cross-border activities has led to the installation of a series of remote surveillance towers, bristling with powerful cameras and associated hardware.

An example of these remote video surveillance systems (RVSS) is along a 360-mile stretch of border surrounded by vast expanses of water – from Buffalo in New York to Detroit and Port Huron in Michigan – an area awash with thousands of pleasure craft, numerous marinas and hidden canals and channels.

In the past, US Customs and Border Protection (CBP) agents in the border area had to rely on a combination of local intelligence and gut instinct to tackle illegal activities, such as smuggling and drug-running. Now, however, they have access to sophisticated surveillance equipment to help them.

There are 25 sites with high-resolution cameras and radar driven by artificial intelligence, situated along the waterway for maximum coverage. Most of the radar units and cameras are installed on towers, while three are mounted on buildings, such as the 73-storey Renaissance Centre in downtown Detroit. The system can detect and monitor vessels miles away that leave the Canadian shoreline, and automatically alerts operators when a vessel enters a designated area, thanks to software that recognises unusual vessel movements as distinct from ordinary traffic.

The Buffalo and Detroit sectors manage the system via their command centres, with operators having multiple screens showing views from several sites, the availability of equipment and personnel, and a bird’s eye radar map of vessels on the water throughout the area. When an operator clicks on one of the multiple squares representing vessels, the speed and direction of the vessel pops up, and the radar blip can be matched to a camera. Displays can also be thrown onto a large video wall at the front of each control room.

According to CBP, the installation of the surveillance towers has led to the better deployment of personnel, with a consequent increase in situational awareness, accuracy and safety. In many cases operators have been able to zoom into a suspect vessel, giving the pursuing agents valuable information about the vessel and its crew, and can capture the boat’s registration number to perform background checks. Typical tactics smugglers use when delivering their contraband, according to CBP, include a jet ski dashing across the waterway, two vessels rendezvousing, or a boat skirting the international border on the Canadian side and then turning sharply at high speed toward the US shore.

The latest stretch of border to be considered for surveillance towers – both fixed and relocatable – is in the Swanton sector, an area of some 24,000 square miles in Vermont and parts of New York and New Hampshire, stretching 295 miles along the US-Canadian border. A total of eight sites are included in the proposal, with some having a relocatable tower installed in advance of the fixed tower.

According to Customs and Border Protection, the increasing frequency and nature of illegal cross-border activities, as well as the geographic area over which they occur, have created a need for a technology-based surveillance capability that can effectively collect, process, and distribute information. The 120-180ft high towers will be equipped with a suite of sensors and/or communications equipment, and are intended to provide remote, all-weather video surveillance and detection capabilities. Each tower is to be equipped with two camera bundles, each bundle consisting of a remotely controlled pan-tilt unit and two cameras – one optical and the other infrared. The systems will enable border patrol agents to monitor rural and remote areas, without necessarily committing numerous agents in vehicle patrols.