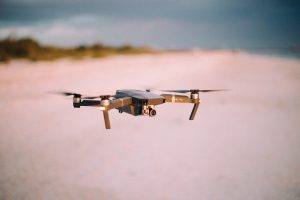 photo by Josh Sorensen for Pexels.com

Palmer Luckey rose to tech fame for inventing the Oculus Rift, a virtual reality headset that helped generate interest in the technology. Now he’s got a different type of tech product to show off: the Ghost 4 military drone.

Built by Luckey’s new company, called Anduril Industries, the two-meter aircraft can be carried in a backpack and is designed to withstand the sand, mud and seawater of military operations. Anduril, which announced the drone Thursday, said the Ghost 4 has a 100-minute flight time and can be autonomously or remotely piloted. It can carry cameras, radio-jamming systems or lasers to spotlight targets. And it can drop packages weighing as much as 35 pounds.

Onboard artificial intelligence algorithms have been tuned to identify and track people, missiles and battlefield equipment. One Ghost 4 drone can join with other Ghost 4 drones to form a data-sharing swarm to relay information back to Lattice, Anduril’s situation monitoring system.

That versatility is by design, says Luckey, calling the Ghost 4 a “Swiss Army knife that can do everything.” Customers including the US Defense Department, Department of Homeland Security and Customs and Border Protection suggested improvements to Ghost 1, 2 and 3 designs that were used for military operations but not publicly detailed. That led to better ruggedness, weatherproofing and other features in the Ghost 4.

Luckey, who is 27 and the founder of Anduril, aims to marry the disruptive ethos of today’s high-tech startups with the old-school defense business. That means bringing artificial intelligence, autonomous vehicles, robotics and sensor fusion to an organization historically more focused on tanks, battleships and fighter jets.

It also means going against the grain of a technology industry whose employees often have different views about making products for the military. More than 3,000 Googlers petitioned to stop the search giant’s work with the Pentagon‘s Project Maven, which would have applied the company’s AI technology to military drone video processing. (Google let the contract expire.) Similarly, Microsoft employees have objected to a contract for military use of its HoloLens augmented reality technology.

Luckey says if the US doesn’t modernize the military, the country will fall behind “strategic adversaries,” such as Russia and China. “I don’t think we can win an AI arms race by thinking it’s not going to happen,” he said.

Anduril is named after Aragorn’s sword, also called the Flame of the West, in J.R.R. Tolkien’s Lord of the Rings trilogy.

Views on military preparedness aren’t Luckey’s only break with some of Big Tech’s cultural norms. He was a prominent supporter of President Donald Trump working in an industry that loudly objected to Trump policies on subjects like immigration and transgender rights. Facebook acquired Oculus, Luckey’s first startup, for a whopping $3 billion in 2014. But Facebook fired Luckey in 2017 after his murky role in an anti-Hillary Clinton billboard campaign emerged during the 2016 campaign. Facebook said Luckey’s political views weren’t involved in his firing.

Luckey and Anduril have customers in the US government, but November’s election could mean a new administration with different priorities. Luckey says he isn’t worried if there’s a change in administration. His sales pitch is aimed at the Pentagon, not the White House. And he sees bipartisan support for knowledge about what’s happening along the US border, where the Ghost 4 will likely be deployed.

“The Department of Defense is a timeless machine,” he said. “It doesn’t move under four-year presidential cycles.”

The term “drone” for years meant massive, expensive, remotely piloted aircraft, like the General Atomics’ Predator used for surveillance and launching missiles in Pakistan, Afghanistan and other hot spots. But a civilian-focused high-tech industry appropriated the word for much smaller aircraft like the quadcopters real estate agents use to photograph houses for sale or the somewhat larger models Amazon wants to use for delivering packages.

Anduril’s Ghost 4 is a hybrid of both ideas. It’s small and battery-powered, but it’s got military duties like zapping enemy sensors with lasers or sending targeting information after detecting an approaching cruise missile.

And it doesn’t need a lot of babysitting “One person can manage dozens of Ghosts,” Luckey says. They can be programmed ahead of time to fly “dark,”monitoring a site or tracking subjects but sending and receiving no data until they return to base, to avoid radio signal detection.

And it can link with its fellow drones into a cooperative swarm. If one can’t communicate with a base station because of wireless jamming, it’ll try to shuttle data to a fellow drone that can, Luckey said.

The unusual helicopter-style design is quieter, more efficient and can carry more payload than a traditional quadcopter, he said. It competes with more traditional drones as well as fixed-wing drones, including some in use on the US’ increasingly high-tech border.

Ghost 4 drones connect to Lattice, a system that ingests data from thousands of sensors. That includes high-resolution video, imagery from infrared cameras and radio emissions from enemy equipment. It’s all presented on a 3D map.

For now, military customers use Lattice on laptops or phones. In the longer run, Luckey believes soldiers will tune in, too, wearing augmented reality headsets that overlay Lattice-supplied details with their real-world environment.

In a 2018 talk, he spoke eagerly of soldiers becoming “superheroes who have the power of perfect omniscience.”

Technological superiority doesn’t always win wars, though. Vietnamese soldiers withstood the US military’s most advanced weaponry in the Vietnam War. But Luckey believes that Lattice will dispel some of the fog of war, helping keep track of who’s friend or foe. “If you can get rid of 90% to 95% of the uncertainty, that’s a huge deal,” he said.

And someday, his Oculus-inspired view of “Call of Duty goggles,” AR headsets named after the popular military video game, will come true on the battlefield, he believes. “I know sounds like fantasy, but that’s what I’m trying to build.”