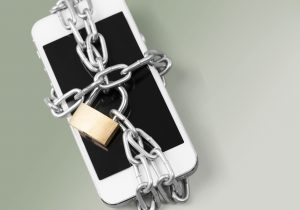 YOU ARE, WE hope, already protecting your phone with a PIN, a fingerprint, or a face (or all three), but sometimes you’ll want to add an extra barrier to particular apps—if you’re lending your phone to a friend, say, or if your kids or partner are always borrowing your phone for whatever reason.

How you want to apply this additional protection is up to you. Some apps come with it built in; in other cases you’ll need to enlist the help of a third-party app. The process is also different depending on whether you’re using Android or iOS, and so we’ve split our guide up into two sections.

Apple doesn’t give third-party apps quite as much leeway on iOS as Google does on Android, so you won’t find any general-purpose locking tools in the App Store. Instead, you’re relying on the individual apps themselves—many apps that can hold sensitive information will give you additional options.

Apple’s own Notes app for the iPhone is one example. You can lock individual notes by tapping the Share button (inside a note) or long-pressing on a note (on the notes list) and then choosing Lock Note. Notes are locked using Face ID, Touch ID, or a PIN code, and you can set this via Notes in the iOS Settings app.

WhatsApp has protections in place as well to keep prying eyes out of your messages. From the main screen, you need to tap Settings, Account, Privacy, and Screen Lock—you’ll then be able to set up Touch ID or Face ID to guard access to your conversations. If either of those methods fail, you’ll get pushed back to your phone’s lock screen passcode.

Another third-party app with this same security measure is Dropbox, which is handy if you don’t want your toddler accidentally wiping all your files with an ill-judged finger push. Tap Account, then the cog icon (top left), then Turn Passcode On. When you’ve set a passcode, you’ll also be given the option to use Touch ID or Face ID as well.

We can’t guide you through every app on iOS, but have a look inside your favorite ones to see if an extra security layer has been included. Evernote, Amazon, and PayPal are three other apps that can be locked with Touch ID or Face ID, and many banking apps now have the same feature too, so even if someone gets access to your phone (with or without your permission), they can’t access all of your apps.

You have a couple of other tools you can turn to in iOS: They weren’t primarily intended for securing apps, but they can do the same job. The first is Screen Time, which you can access from Settings: If you tap Use Screen Time Passcode to set a passcode, then select App Limits and set the daily limit for an app to zero hours zero minutes, you’re effectively locking other people out of the app without the passcode.

Your second option is Guided Access, which you’ll find in the Accessibility menu in Settings. Once you’ve enabled it, open an app and triple-tap the side button or home button—you then won’t be able to switch to any other app without entering the phone’s passcode. It’s ideal if you want to let one of the kids play a game, but don’t want them to venture onto any other apps.

Android does let third-party apps control access to other apps, so you can install one of these app lockers and block access to any apps you don’t want other people snooping around inside. A passcode is usually required to gain access, though some locking tools can work with fingerprint sensors or face recognition.

There are a whole host of these apps available on Android, as a quick search on the Google Play Store will confirm. However, bearing in mind that these apps need some pretty deep access to your phone and your apps—because that’s what they need to function—it’s important to only consider ones that you completely trust.

We’ve tried quite a few of the app lockers on Android, and while we didn’t come across any dangerous or suspicious activity, we did come across apps that had a variety of rough edges to them, a lot of advertising, and a lot of extra features that you don’t necessarily want to add on top of the core functionality.

With all that in mind, Norton App Lock is the tool we’d recommend, from a name that you can trust. (You don’t need to have signed up for any of Norton’s other products to use App Lock.) In this case you can lock apps with either a passcode or a pattern drawn on the screen, and there’s also the option to block access to the Recent Apps screen too.

Once you have Norton App Lock installed, it couldn’t be easier to use: You just tap the apps that you want to protect with your passcode or pattern, and that’s it. There’s also the option to turn Norton App Lock in its entirety on or off as needed. If you forget your passcode or pattern, it can be recovered using the Google account that’s linked to your Android device.

Some individual apps have also taken it upon themselves to put extra protections in place too. One of these, as on iOS, is Dropbox—if you go to Settings from the main app menu, you can select Configure Passcode to do exactly that. Any time that you or anyone else opens up Dropbox on Android, the passcode will be required to progress.

Finally, you can use an Android feature called Screen Pinning to keep kids, partners, friends, or colleagues inside one particular app. Bring up the Recent Apps screen (it’s a swipe-up-and-hold on newer versions of Android), then tap the icon at the top of the app you want to be available, then tap Pin. Switching to any other app won’t be possible until the phone’s passcode has been entered.