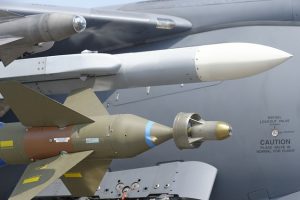 Telecommuting social-media manager for the U.S. Strategic Command left the laptop open and unsecured while stepping away.

A nonsense tweet sent out from the official account of U.S. Strategic Command is no reason for alarm, according to the department. The social media manager’s kid found an open laptop, pounded on a few random keys and sent the tweet, which read, “;l;;gmlxzssaw” last Sunday.

The tweets were met with alarm since @USSTRATCOM controls the launch codes for the country’s nuclear arsenal. Mikael Thalen, a reporter with the Daily Dot, decided to file a Freedom of Information Act (FOIA) request to get answers.

“Filed a FOIA request with U.S. Strategic Command to see if I could learn anything about their gibberish tweet yesterday,” Thalen wrote. “Turns out their Twitter manager left his computer unattended, resulting in his ‘very young child’ commandeering the keyboard.”

USSTRATCOM stressed, according to Thalen, the post was not the result of a breach.

Sounds like the social-media manager found out what happened through an angry phone call.

Adding another layer of confusion to the situation, QAnon conspiracy theorists began sharing the tweet as some sort of sign.

Although the offending tweet has been deleted, it serves as a reminder for those working from home that keeping systems secure can be challenging when telecommuting.

Telecommuting employees can increase security threats, which as was demonstrated in this instance, can even be a mobile, curious toddler.

Off-site workers are also more vulnerable to outside attacks, like phishing and brute-force email attacks, according to a report this month from Kaspersky security researchers.

And, the stress of working from home, particularly for young people and caregivers — like parents of young children — can easily lead to lapses in security, according to a new report from Facepoint. They polled workers and found 67 percent of employees under 30 said they use unapproved apps to help them get work done. In addition, 55 percent of those under 30 reported making more mistakes since working from home, compared to jus 27 percent of older workers.

Caregivers and parents are also under massive amounts of work-from-home stress, which Facepoint found caused about 56 percent of their respondents caring for others to make work-related mistakes because they are distracted.

“Lockdown has been a stressful time for everyone…without additional support from employers, young people and caregivers could continue to deviate further from pre-set and learned IT security rules, exposing their companies to further increased security risk,” according to principal researcher for Facepoint Margaret Cunningham.

She also added these employees need help with stress levels and burnout from their managers. Ignoring these, she explained, puts organizations at greater cybersecurity risk.