What South Pole scientists can teach us about surviving a long, dark COVID-19 winter 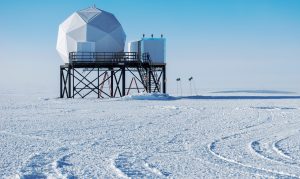 Each year, roughly 40 people choose to spend winter at the South Pole. Here’s what they can teach you about handling a cold, isolated COVID-19 winter.

As temperatures fall over the U.S. and COVID-19 infection rates continue to spike, the prospect of an isolated winter looms. Fewer daylight hours, separation from friends and family, and limited options for excursions and entertainment make the coming months seem bleak.

However, each year, a group of roughly 40 people plunge themselves into frigid temperatures, darkness, and isolation. And they do it by choice. In a routine called “winterovers” at the South Pole’s IceCube Neutrino Observatory, this international group of scientists keeps the first-of-its-kind station running during the brutal winter months, when the average temperature can be -80 degrees Fahrenheit. The observatory uses the South Pole’s ice to observe subatomic particles called neutrinos, which provide information about cosmic events such as exploding stars and phenomena such as dark matter.

The area surrounding the IceCube is flat and snow-covered for as far as the eye can see, says John Hardin, who is currently spending winter at the station. “It’s called the Antarctic Plateau for a reason,” he says. And the South Pole takes dark to a new level—the sun doesn’t rise between February and November. The team works in the observatory and resides roughly two-thirds of a mile away at a building called the ICL.

Being prepared for cold, dark conditions and living away from friends and family is essential to make it through the nine-month span. Those who have spent punishing winters at the South Pole, along with mental health professionals, have some advice for facing down the coming COVID-19 winter.

PREPARE TO PASS THE TIME

When Kathrin Mallot began planning her 2018-2019 winterover to the South Pole, she knew she’d need activities to keep herself occupied. She knew the ICL had a music room, gym, and other amenities. She also brought along an origami book, colored pencils and paper, and a book of guitar lessons.

“I never opened the guitar lessons. I never touched the pencils because there was so much to do. So ideally, you have so many things to pick from that you’d never fully get around to doing everything,” she says. Start thinking about things you would enjoy doing or learning if you need to be isolated, and begin acquiring the materials or making plans to do so.

GET YOUR SPACE READY

Mallot knew she’d be awash in a sea of white, so she also brought posters of the outdoors with her, along with postcards that had been sent to her. The photos of trees and forests made her happy. (Biophilic design has been shown to do that.) Hardin brought along some coding projects and books. He sought out places in the ICL where he could find some quiet time for reading.

There’s a good lesson there for the rest of us: Make your home as appealing as you can. To the extent possible, now is a good time to get your home ready for the winter, says Tyler Arvig, associate medical director for R3 Continuum, a behavioral health and security solutions firm. While everyone’s living situation is different, if you can create the spaces that you’re going to need—a place for work, home schooling, exercise, etc.—you can help set yourself up for greater success. This year brought a spike in home improvement investments. And while not everyone can afford to do a home makeover, simply making your space more inviting and making sure you have “at least one place where you can go to relax is important,” he says.

STRUCTURE YOUR DAYS—BUT NOT TOO MUCH

Having a daily and weekly routine was helpful to Mallot—to a point. If every day is overly structured, and your routine becomes too predictable, that can be unpleasant in its own way. She learned to ride a unicycle, but after a while she left the once-a-week lesson. “Even the most exciting thing, when you always do it at the same time on the same weekday, becomes boring,” she says. She also taught a French class and found her students felt the same way about having class at the same time every week, so they discontinued it.

To combat the routine, she and her colleagues scheduled fun events to anticipate, such as the South Pole Olympics. “We weren’t the most athletic bunch so we had competitions in Mario Kart [and] Call of Duty but also did some sports like three-on-three volleyball, Wiffle ball and ‘sprint up the stairs,’ as there is a long staircase going from the underground levels to the top level—92 steps.” Celebrations such as Christmas in July and Oktoberfest also broke up the monotony.

Think about how such challenges, games, and learning could be integrated into your days. For example, November is National Novel Writing Month, also called NaNoWriMo, a movement that challenges authors to pen the first drafts of their manuscripts in 30 days. Or challenge yourself to learn something new with an online course.

Depending on your living situation, you may feel you have not enough or entirely too much contact with others. This is where you need to understand your own needs and adapt accordingly, says Sanja Licina, Future of Organizations lead at tech services company Globant. At the South Pole, Hardin sought out quiet places to read. However, he also had bouts of homesickness and missed his family, especially during holidays. He made a concerted effort to keep up with some family and friends via email and via Voice over Internet Protocol (VoIP) phones when the satellite-based internet was available.

“Down here, time moves familiar with the old saying the days are long, but the months are fast. It’s easy to wake up and [feel like it’s] a week later,” he says. “For me, that was the biggest challenge for keeping in touch with people.”

During the times when Mallot felt overwhelmed with her work, it helped to have team members she could trust to step in and help or give her a break. IceCube teams are trained in conflict resolution and go through a number of team-building exercises to help them collaborate and communicate more effectively.

That’s a good reminder for the rest of us, Licina says. Whether you need support and additional flexibility to balance working from home with children or other responsibilities, turn to your team and its leadership to get the support you need. Look for where you need help and seek out the resources that are going to help you do your job better.

Sometimes, the support you might need is in managing the stressors of this time, Arvig adds. With telemedicine’s acceleration during the pandemic, getting mental health support is also easier than ever. Limit your exposure to the news if it upsets you, and seek out people who help you feel better and less alone.

TAKE CARE OF YOURSELF

The old standby advice to take care of yourself is more important than ever, Arvig adds. And if Hardin can don his gear to withstand the South Pole’s frigid temps to get outdoors, we can put on some layers and do the same. Getting outside boosts mood, we know. “It’s kind of cool to walk around in all that emptiness,” he says. Exercise can help boost your immune system and may help you get better sleep.

And do things that just make you happy. Mallot brought a few items of clothing that made her feel good when she wore them. Find ways to bring such everyday joy into your life to give yourself a boost.

TAKE IT DAY BY DAY

Thinking about the pandemic’s challenges for months ahead can feel overwhelming. “Don’t bite off the next three months,” Arvig says. Try to be more mindful and in the moment.

And don’t dismiss the challenge of the pandemic, Mallot says. She’s currently under COVID-19 lockdown in France. People assume that it’s easier for her because of her time at the South Pole.

“It is not,” she says. She went to the South Pole purposefully. The quarantine lockdowns are different. It’s difficult to not be able to go where you wish or see loved ones at will. During the first quarantine, “I was struggling, and it’s perfectly fine to struggle. I mean, this is not a normal situation. And you shouldn’t have to pretend that it’s normal.” But with some preparation and ingenuity, it may at least be more manageable.